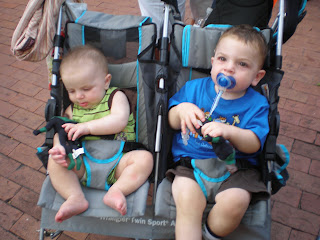 So my oldest son, Eliott is a superhero fanatic. At age 3 he can not only name most superheroes shown to him, but he also knows if they are Marvel or DC and in many cases, the name of their alter-ego. Shia is following suit. 2 of his first words have been Batman and Spiderman and he is not even 17months old! His lovey is also a Spiderman! So it shouldn't surprise us that Dov even at 4 months old has jumped on the band wagon!

At Six Flags on Saturday, we bought a little Green Lantern doll for Shia and one for Dov (just in case he might want it later). Shia was playing with his GL in the stroller. Dov was sitting there staring at him and it and trying to grab it away. So quickly after, I gave in and handed him his first superhero as well.