Is the love of Superheroes genetic? 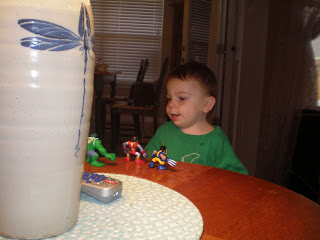 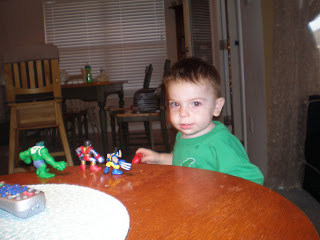 Superheroes are everywhere in our house. Most people who know Eliott, my about to turn 4 year old, know that he is a superhero addict. He can distinguish between Marvel and DC. He has a favorite for each: Iron Man and Flash, respectively. He also has about 100 little figurines from Justice League to Avengers to X-Men. Lately he has been gung-ho X-men (hence the Wolverine style birthday invitations), so the 15 X-Men he has have been utilized daily. I am learning that the Superhero obsession is not stopping with Eliott. It is taking over the life of Shia, the almost 18 month old also. Shia's lovey is a Spider-man, but for a while we just thought this was a fluke love of Superheroes. He seems to have attached himself to the Marvel figures specifically. Yesterday at Target we bought him his first Superheroes: a Colossuss and a Wolverine. He has been carrying them around in a Halloween pumpkin for the last 48 hours. The pumpkin is sleeping on the floor next to his bed also. Last night I caught Shia doing something Eliott used to do at the same age... lining up his Superheroes and talking to them. (see photo attached). I have a feeling that the # of superheroes in our house is going to triple within the next year once Dov gets involved too.
Posted by Jaime Stickler at 8:11 PM