The funny things a one year old does. 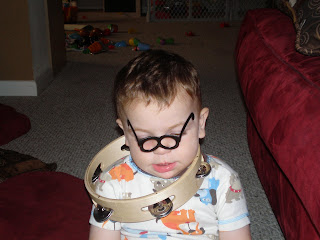 1. I turned around yesterday a noticed Shia standing in the playroom with Potato Head glasses on his nose. Then, later, he added a tamborine as a necklace.
2. Today he was standing on a laundry basket while Dov was asleep on the couch. He was screaming at the top of his lungs so I said ssh ssh Dov is sleeping. He spent the next five minutes alternating screaming with ssh ssh.
3. This morning he had a little play cup and was standing by the sink pointing up. He wanted water in his cup. I gave him a splash and he spilt it on the floor. Then he looked down and pointed at the spot and asked for a paper towel.

He just gets funnier every day!

Posted by Jaime Stickler at 1:33 PM