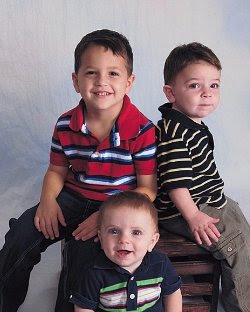 Today was picture day for the Stickler 3. Our expectations going in were very low. We have done pictures every late Summer/early Fall since Eliott was little.

Two years ago, Eliott - age 22 months - would not put down Doggie (his lovey) and when he did, you could so of still see Doggie hiding behind him in the pictures.

So this being the first studio shots of all three, we weren't expecting much...we were pleasantly surprised.

Eliott did smile - followed directions - and even wanted to go first. He did put his foot down when asked to hold Dov up or allow Dov to lie on his back, but Dov is heavy so we understood.

Shia, who is never camera-shy basically stared into space and refused to smile... never thought he would be the difficult one.

Dov was happy Dov and cooperated probably better than Shia did last year.

It ended up being a relatively pleasant experience.

So maybe we will continue the tradition of passing down the "picture dress up" shirts each year if it is going to go this well.
Posted by Jaime Stickler at 7:42 PM